This past weekend Sean and I traveled to northern New Jersey to attend a mega geocaching event. We had gone last year and I really love seeing historic buildings and nature all rolled into one! I suggested one route and we took the one he goes to work using. He wanted to show me where […]

The second week in July, Sean and I climbed in his ‘old’ hot car (the a/c had gone on it last month) to visit the Cape May, NJ area on a day trip. I did a little research so we could snap up a few earth caches. With these, you usually have to answer a few questions or take a photo of where you are. We headed down to Sunset Beach, the beach furthest south. It’s part of Cape May, but a beach where you can collect  ‘Cape May Diamonds’. a clear quartz that can be cut to look like diamonds. The tiny ones on the top are the ‘diamonds’. 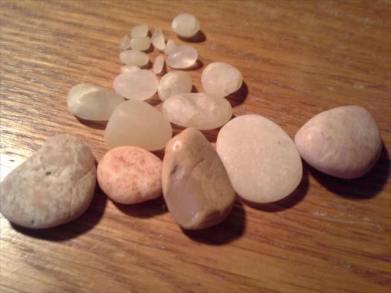 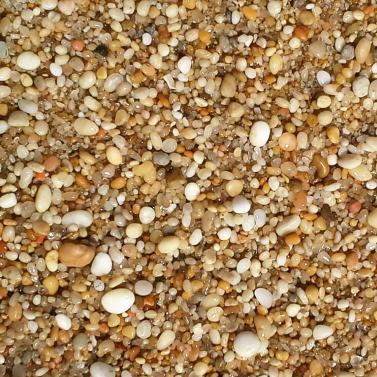 We indeed found some. We wrote our names in the sand too, but there, and not up the beach where the coords were on the cache page-oops. The sand was actually better to write in where we were. We did eventually go up in the area and find a physical cache. 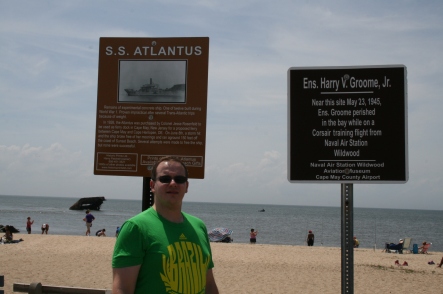 Sean standing near the sign. Behind him is the wreck of the S.S. Atlantus.

After a storm, this cement ship got stuck there for good! 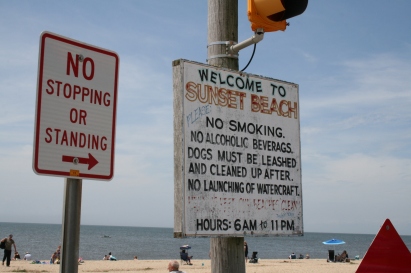 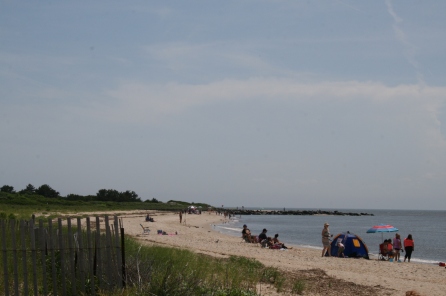 Looking up the beach where the real sand earth cache should have been written. 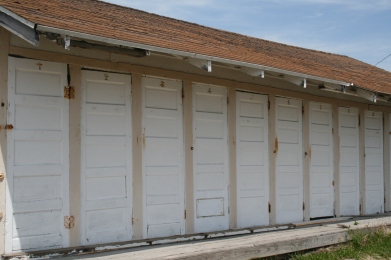 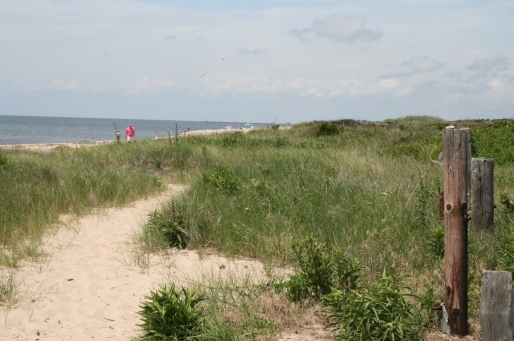 You can’t go any further than this in NJ 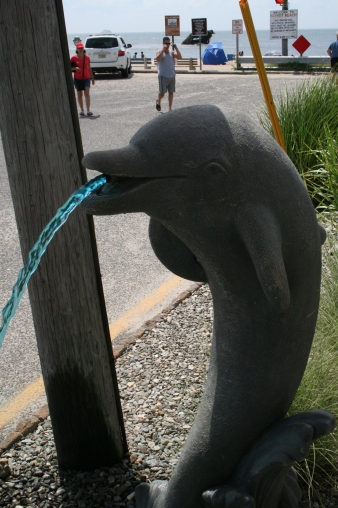 Outside the nice gift shop. They have Cape May diamonds that look like real diamonds here. 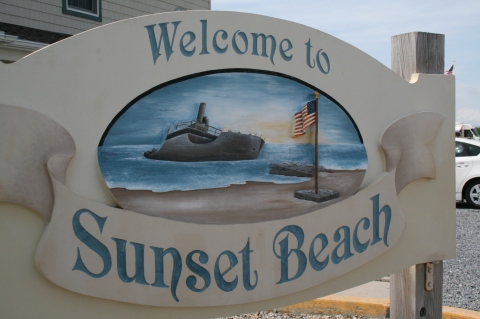 Look how much of the shipwreck is in this photo! 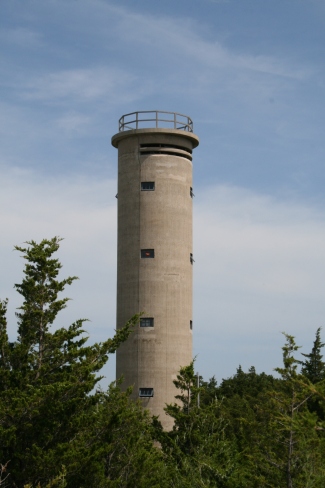 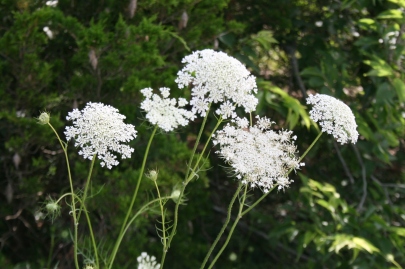 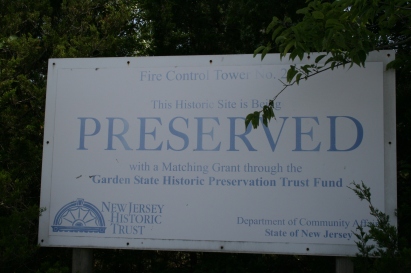 We sat on Sunset beach a while, though it was warm and I was in a skirt. I really didn’t plan on sitting on the beach at all!

We headed up to the beach near the town of Cape May, but didn’t go shopping there. We then hit Wildwood and Sean wanted to get a Wildwood t-shirt for his collection. Someday I’ll be making him a t-shirt bed cover!

We were getting hungry for dinner and found a place on Yelp! in Ocean City. We sat at a picnic table and Sean treated me to a lobster dinner. As it wasn’t fancy, it was cheaper, but most of the meat was in the tail anyway. 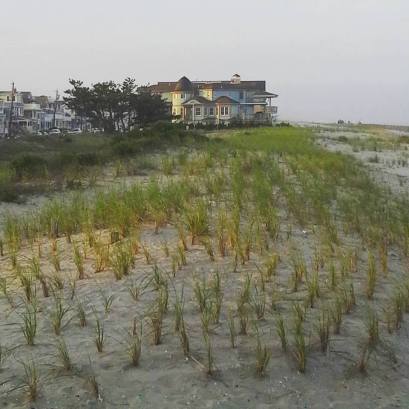 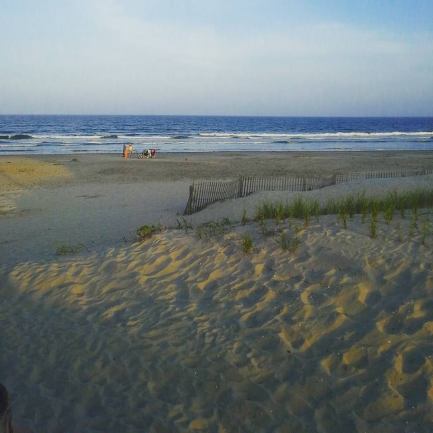 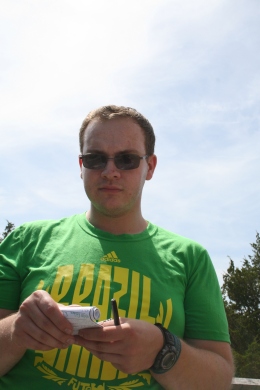 Sean signing the Vet’s memorial cache and the memorial itself. 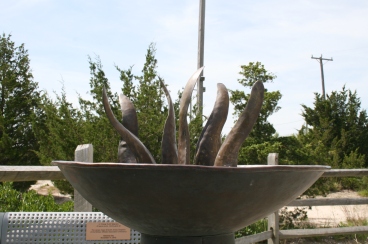 We looked for a lot of caches that day! We didn’t know it would be our last little trip in his 2005 Taurus. He was waiting to see how he fared in his new job before he looked at another vehicle. A few days ago, we all went car shopping. We stopped at one place and got ignored. We started to drive past another place and I pointed out a model he was interested in. Well, after test driving about 6 or more Hyundai makes, he picked a 2013 Elantra  in bronze, the last test drive he did! He liked the added features of blue tooth and heated seats. It had low mileage too. So happy for him. We took a day trip yesterday to a cool park in Bucks County. That will be my next post! 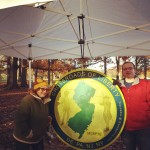 I was looking through my feed on Facebook Friday night and saw where a few geocaching pals were up in Roselle, NJ at a pre-bash function for a mega event. A mega event is something every cacher wants to attend. If over 500 people sign up for an event, it turns into a mega event! It was a Metro-gathering, meaning people from New York, Pennsylvania, New Jersey and even Delaware and Maryland could attend. I was thinking about it all evening and when Sean got up in the morning, he asked if I wanted to go and I said sure! It’s not around the corner, over 125 miles one way, mostly up the turnpike. I started to text a pal who was on her way there. When she got there she said to come on up as it wasn’t overwhelming crowded. I know a few seasoned cachers said in the log for the cache event that it was their first mega event! We wished we had planned this better as we left past 11:30. We stopped at a McDonald’s near Sean’s work to use the bathroom and decided to grab a wrap. Then Sean wanted me to help him find a cache that eluded him on previous looks. I saw it was in a tree and looked for something hanging down. We found it after a few minutes.

We got to the park about 2:45. We got a ‘tricky tray’ ticket for a prize and then we had to pick a prize. They really outdid themselves! I picked a big ammo box and Sean a cammoed backpack. We didn’t win as far as we knew. We’re thinking a lot of people had left and maybe they had to chose other winners. We decided to do some caches instead of waiting to see if we really did win anything. 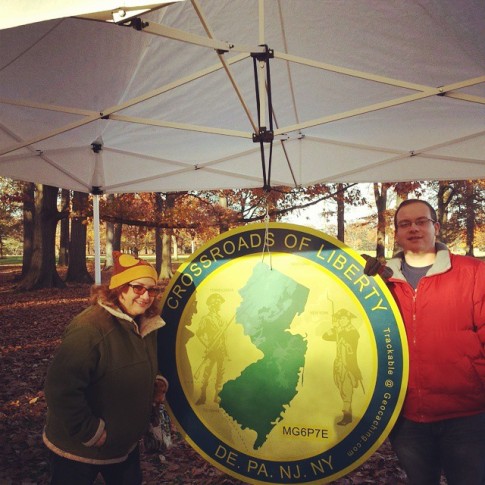 We were all bundled up. Love my faux fleece coat. I wasn’t cold at all. I think it was about 40 degrees. I swear my shadow on the world’s biggest trackable coin looks just like my grandmom Ruth. (Miss her and think about her!) She is always with me. Anyway, you can see the tracking number and surely you can say you discovered the coin on my blog! 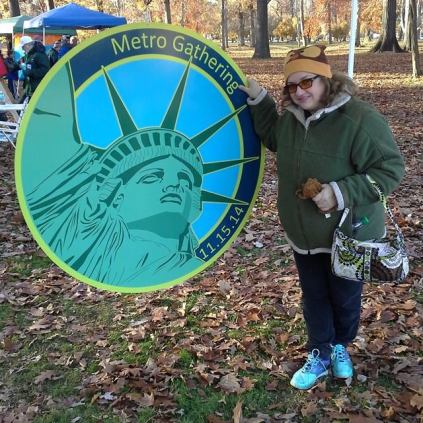 We were very close to Manhattan-about 1/2 an hour. 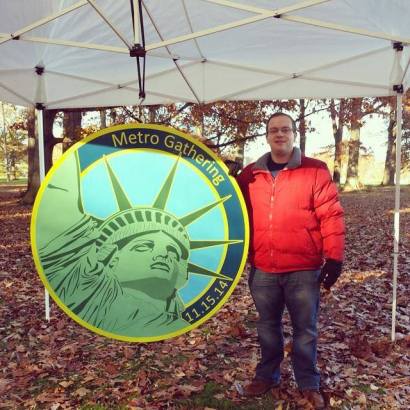 I can’t mention a place as Sean is ready to go! He is so glad to have his weekends off. It would be awesome for him to meet a lady cacher his age. Maybe someday! I know a few people who met through caching!

So we also ‘found’ the mega cache. They were hoping to break a record by having the most log entries in one day. Hope they did it. Need to add the photo.

They was a statue of the Liberty where you could pose too. 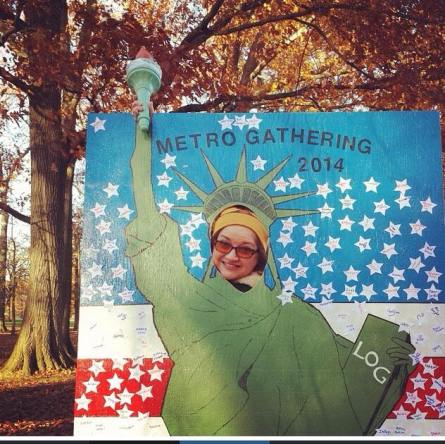 We went around and did some new geocaches in Warinanco park where the event was held. Getting there so late, we lost sunlight quickly. We didn’t get to really see the lake. We met up with some guys at a ‘lookout’ or a place to stand and admire the lake. They found the cache first. We found about 6 altogether. 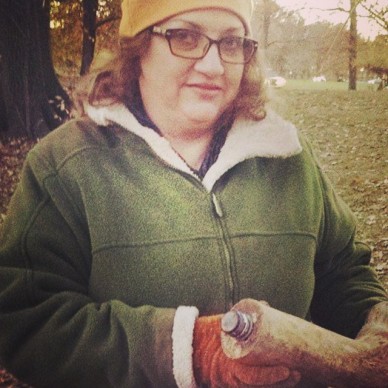 Sean lightened this up. The hint was something like don’t overlook a pile of sticks. We got to ground zero and I started moving logs and branches and Sean saw this! They had drilled a hole in it for the cache! Very clever.

I bought a blue sweat shirt with the logo on it from the event plus a sticker for my car. Sean bought a bison tube and this little mini ammo box for me. It’s so cute! 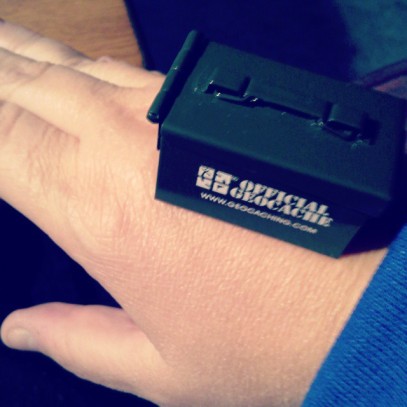 We only saw a few people that we knew indirectly. I said, wow you look cold! The one lady, who I had talked to at a few events walked right past me, but another lady chatted with us a bit. The guy with them has a big event every year and didn’t say anything either. Wow, that was rude. It’s not often you see people you can point out in a crowd so far away from home.

We also got a few lab caches which are caches associated with the event that get taken down. I love learning about different places and we would like to see Roselle again some other time. Brian and I are up to over 700 finds. Not bad for ‘sometimes’ cachers. Sean is approaching 400.

I will plan our itinerary for our trip in a few months so we can see places and grab some caches in the states we need. I can’t wait to see a southern style Christmas!

Over the years, we drive up to scenic Bucks County and Peddler’s Village to eat at the Cock n’ Bull restaurant brunch buffet. Usually it is for Sean’s birthday in October. I mentioned going there last week and we headed up there yet again! It was a cool and brisk day. Sean was driving and […]