I am definitely behind in my posts. October has proven to be super busy with us getting back from our travels, going back to work, cleaning up the  yard (not finished) and changing out my summer to winter clothes. And Sean got a job in his field! He will be starting his GIS job with […]

On the 12th, Sean was nice enough to treat his dad and me to a Phillies baseball night game. It’s been about 3 years since I went to a game and the temperature was about 92 that day and a bad storm blew in. The game was cut short at the 5th inning and we got home to water pouring in our basement near the well and no power. Not fun.

So….this time around rain was again in the forecast.  We left around 4:15 and Sean headed toward 95 through Wilmington to hopefully avoid traffic. Turns out there was an multi-car accident near where we where headed. We thought to go back down Rt. 1 and that helped us get there before the game started. We wound through parts of Philly that we hadn’t been to in years! As we walked into the concourse area, we saw it was raining and the workers were laying down the tarp on the field. We thought we might as well get some dinner and went to a sit down restaurant adjacent to the stadium. The guys had burgers and me a cheesesteak.

After we ate, we saw that they were ready to start the game around 8 pm. Our timing was good then.

We had good seats behind 1st base about 16 rows back. 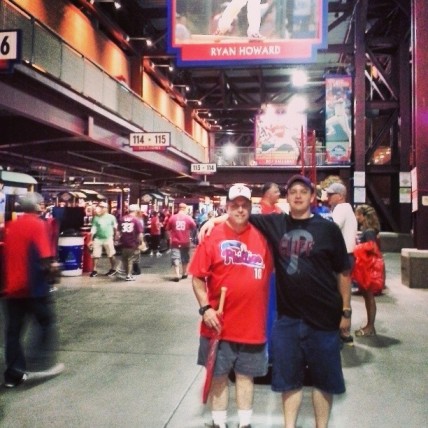 This was taken when we first got there.

Sean took this cute photo of  us. I just had to use my Phillies bag that night! 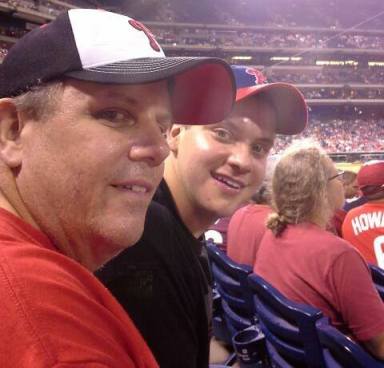 Love watching these guys watch baseball as they share a special father/son snicker-actually for football too!

We also had our Phillies umbrella with us which went up a few times.

The first inning was awesome, the Phils scored 6 runs! Roy Halladay, the pitcher had been sick and he looked pale and clammy. By the 5th inning he threw wildly to 1st and then 4 runs came in. He was really mad at himself too as he threw down a ball or something.

At one point, a foul ball hit by Jimmy Rollins bounced off a bar and hit a young lady in the back of the head (she was in the first row to the left of us). She immediately put her hands behind her head and the EMT and a bunch of people went to check her out. She got up by her own accord and I guess went to rest in the office there. Jimmy kept looking at her as he had made it to first base. I bet he went to check on her after the game if she was still there.

We stayed until the 7th inning stretch as it was getting late.

We stopped and grabbed a few shots leaving the park. 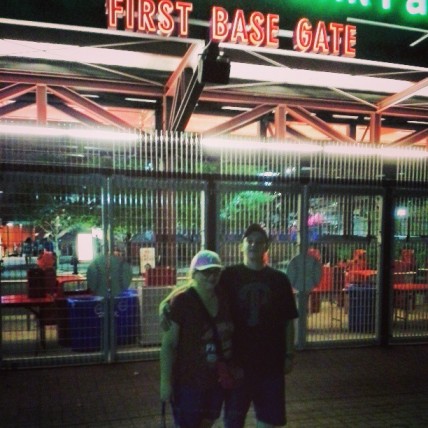 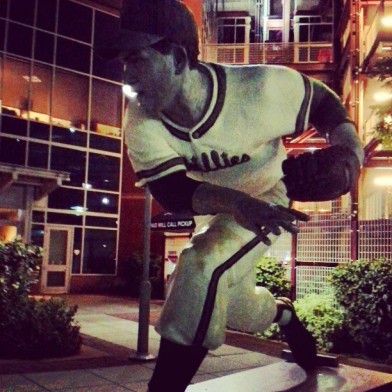 We got home a little after midnight as Sean wanted to stop for a hoagie for lunch later that day.

It was a hassle and a half to get there, but I think everyone should go to a game to see the action in real time. The Citizen Bank park is really a great park and they think of everything from a play area for the kids to a nice restaurant.

I just realized I have been blogging over 9 years now!

The last few times we have gone past Mt. Penn near Reading, PA., I saw a pagoda way up at the top and wondered about it. I mentioned to Sean how much I’d like to see it up close and so we took a day trip there a few weeks ago. We drove through Reading, […]

A few days ago, Geocaching.com offered a ‘get outdoors and geocache’ souvenir if you found a cache on July 13th.  It is added to your souvenir page almost like a stamp collection!

Brian was at work and I was trying to find an interesting cache to look for. I found one located near Wooddale Bridge in nearby Delaware. It was big enough to add a travel bug or swag to. I wrote down the directions which were 3 turns. So of course the GPS on the phone went out (I need to use my GPS device and upload caches to it!) so we went by my handwritten directions. Thank goodness. Brian was getting a little perturbed as he thought the bridge was closer. Opps…maybe 7 miles away. So we found it-no other cars were around, so we could take our time (mostly me) looking. It wasn’t hard to find at all! Yes!

See that big hornet’s nest on the upper left?

Look at all the raging water from all our rain.

The cache wasn’t too difficult to spot as it wasn’t hidden well. I hid it a bit better. You never know who is going to come along. 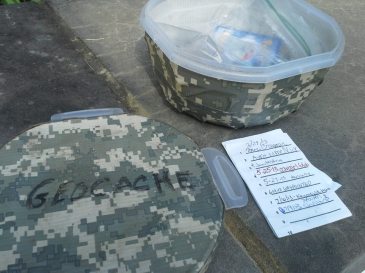 I hadn’t signed it or added the little Eagle with the travel bug attached to it.

Driving back we stopped the Mount Cuba Center and drove up their long drive. We saw this gorgeous mansion at the top. It belonged to the DuPont Copland family!

This is just used for administration and an educational facility now! 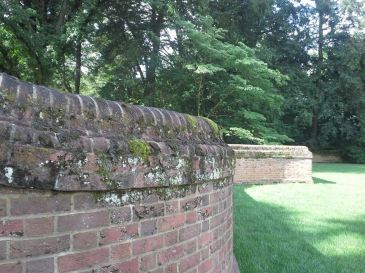 We decided to go up to Kennett to check out a new cheese steak place. The night before, the place was packed! When we got there, a bike race was going on and the middle of town was portioned off.

See the racers whiz by!

We walked down to the new market place and there was indeed a cheese steak place, a crepe place and seafood area and a wine seller. We decided not to get a sandwich as we had a burger the night before. We ended up in a Mediterranean place and ordered a cheese tray (very skimpy and no crackers) and salads that had lots of greens, but little of anything else for the price. I always wanted to try it, so now I know the dinners ‘and’ salads are pricey. Nice waiter though.

Some shots from around quaint Kennett Square, PA

Almost two years ago, the three of us went to a Phillies game. It was about 92 degrees and we had to sit in the sun. Not a pleasant experience, but I had water and also my mist fan. So about an hour or so into the game, it started to get breezy and then the sky got dark. There was lightning and we are glad we didn’t get ‘ZAP’ped. It started to pour and we got drenched and had to run to the car and drive home that way. We came home to find water pouring in where the pump is-never happened before. We had to scramble to get rid of it and clogged up the sink in the bathroom down there-still that way.
Anyway…thought you’d like to see the video board at Citizen’s Bank Park.

Us in the audience!, originally uploaded by DianthusMoon.

Sean and I did get down to see the taping of a local Philly chat show. It was lots of fun to be part of the audience. We got up at 6:30 am, left at 7:50 am and got there at 9:20 a.m.-that was close! We were some of the last people to check in, but we got to sit in the second row behind women and their kids who won a Phillies photo contest. They had added that stip on to their Facebook page and I do have some good photos of us at that smoldering game last year and Sean standing in the parking lot of the stadium. Sean tries to go to a game a year with his dad, but couldn’t afford it this year as he purchased the car. So this was a fun thing to do and he got to see the ace pitcher Cliff Lee.

I photographed these off the tv when we got home as they re-broadcast the show at 5 pm.
Who we came to see: Cliff Lee

Author and cook Cynthia Goch was on and made a few dishes-one of which was Eggplant Pizza. Here’s the recipe:

Me outside the studio with our goodies-a towel, a photo and a Chester County Women’s booklet (Sean gave his to my mom). 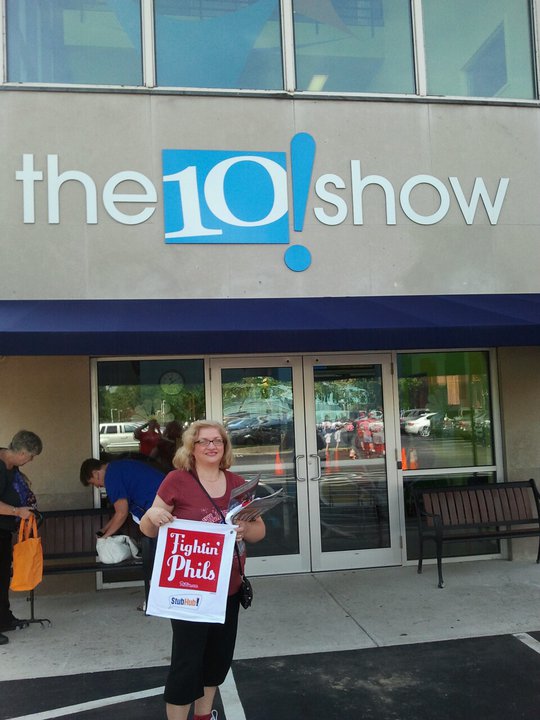 Do we look hot?, originally uploaded by DianthusMoon.

Gee, didn’t realize how red I was. I had had a hat on and then the wind starting blowing before the rain came. I had my trusty mist/fan bottle with me (I saw another lady with one too). That was a godsend!

Grass completely knocked to the ground, originally uploaded by DianthusMoon.

Big storm went through here in the afternoon on Sunday. I was going to have Brian cut this grass which is in the center of a circle garden (most of the flowers on the perimeter got eaten) but the 3 inches of rain and 50 mph winds knocked it down. Got a lot of water in our basement. We were at a Phillies baseball game while all this happened. Many roads were washed out and we had to come another way home. We didn’t have power after we were home for almost 4 hours. We were using the broom to sweep the water in a hole in the floor in our basement. After the power came back, Bri used the wet vac and put fans around. I have to move things and toss any cardboard that got wet. We haven’t had so much water in our basement for 23 yrs!

…but here are some images (not to say I won’t add more) that will stick in my head.
Thanks to the photographers who shared these with us.

A very brave and talented figure skater. I know someone was looking down on her. 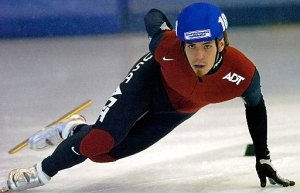 A most decorated speed skater.

Sean said there was a lovely sunset on Monday, so I went out to capture it to share: 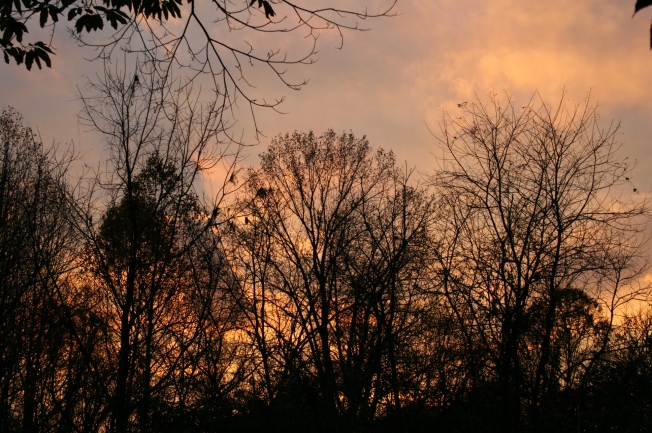 I wasn’t feeling 100%, so I decided to stay off my feet and scan some old photos. My brother always gives me a bunch of them and it takes a while. I just love this one of my maternal grandmom Ruth at age 2 with her sister Ethel about 3 or so. It is dated April 1, 1906! Little Ethel passed away when she was 6 from pneumonia. My grandmom was the second of 6 and she had 2 children and her younger sister Edna had only 1. She had two brother pass on in their 20s. So sad to think that we could have had a larger family if they had lived and married. By the way, my father was an only child with a few step siblings, and Brian is an only child. Our immediate family is about 13.

and after I photoshopped it a bit adding a reddish tint. The tints seem to bring out more detail in these old photos:

And here’s a cute one of Sean on his 1st birthday (1987) on a motorized car he had and loved to pieces: 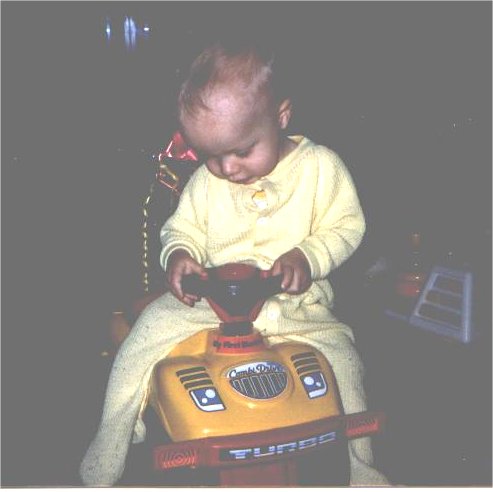 ~~~~~~~~~~~~~~~~~~~~~~~
The Phillies are giving the Yankees a run for their money, but they can’t just play well every 5 games. They have to win the next two game to hold on to their championship title. They had a huge lead and the gap narrowed in the 8th inning. We were on the edge of our seats. I only see 3 Phillies really giving it their best. At least we won the National League Championship to get this far two years in a row-the Yankees can’t say that.
Hoping for a good game on Wednesday!