English Garden in front of the hotel:

Brian, Sean and me had a nice weekend down off the Potomac River at the National Harbor (also known as Oxion Hill, MD). Sean didn’t go to the concerts, but explored the little ‘boardwalk’ town and took a water taxi to Alexandria, VA. He wasn’t sure if he wanted to, but he finally made up his mind to do just go! We went there by car on Sunday and ate, shopped and walked around there.
It was a bit muggy but there was an occasional breeze off the river. The group pictured here is called ‘Brit Beat’ from Chicago. They dress and perform in four different ‘Beatle phases’. This happened to be the Sargent Pepper era. They were great. It was awesome as there were bands from all over the world! We especially liked the band called ‘Old Brown Shoe’ (from a George Harrison song) from the Netherlands. Another cute band was ‘Jukebox’ from Puerto Rico. There were some issues with waiting for bands to set up and then this one band ‘Norwegian Beatles’ didn’t play as they had equipment issues. We mostly enjoyed seeing a new place and sitting and listening to some of best known songs in the world. Some didn’t just play Beatle songs-some Rolling Stones and a few others, even the band’s original songs were tossed in the mix.
And the place we stayed, The Gaylord is the biggest non-gaming hotel on the east coast! There are 2 thousand guest rooms and at least 5 restaurants (we ate breakfast in one). They have an Olympic size pool (Sean stuck his feet in the water). If he had sat in a lounge chair right outside the pool area, he could have heard the music for free! It’s kind of hard not to hear it anyway.

More later!
By the way-used a mesh back support thing I got in a Dollar Store which helped me most of the time, but the chairs provided were metal fold up chairs-ugh.

Brian and I had a nice time at this concert. It was the perfect evening, just cool enough to be pleasant. Bruce sang the songs I knew ‘The Way It Is’ and ‘Mandolin Rain’ near the end. I didn’t know many of his newer songs, but he has a great band. I saw a h.s. pal at the end when we had gotten up to leave and he came out for an encore.

(The above video is 25 yrs old-Sean will be 25 in October!)
Longwood Garden hosts a number of popular singers and performers in their outdoor ampitheatre. A few years ago we saw Boz Scaggs. This year we are seeing Bruce Hornsby and the Noisemakers! A pal from high school said he is really good live, so I decided to get the tickets today. I don’t think there are more than 300 seats, so it’s a small venue. This is after the couple of days at the different beach areas and before Beatlemania. My mom wants to take a daytrip to Atlantic City near her birthday. It’s about 85 or so miles one way for us, but I remember doing it a few times, once when Sean was little. My high school class also has a reunion in Ocean City, NJ either late September or early October. We haven’t been going because of our vehicles, so now since we have more reliable ones, we can hopefully go.
After Beatlemania, I want to have a big yard sale (gotta pay for all these fun things). I haven’t had one for years. I tried the thrift shop, but it isn’t worth driving back and worth there for a few dollars of sales.

Sir Paul the honoree is teary-eyed, originally uploaded by DianthusMoon.

Last night the show ‘The Kennedy Center Honors’ was on and Sir Paul McCartney was one of the honorees. It was neat to see James Taylor briefly sing in honor of Sir Paul as I had seen both of them this year in concert. James was the first singer signed to The Beatles’ Apple record label. I’m lucky to have a copy of this.

Here is the video I made!

Be sure to check out the other videos taken that night after mine is finished. We figured since we couldn’t see Sir Paul from the front, other people’s videos would make up for that and we were correct!

Totally messed up a good photo, originally uploaded by DianthusMoon.

Few legends are born that you get to see in person. Sir Paul McCartney was part of a group that changed music on so many levels. He was part of a song writing duo that produced hit after hit. They arrived on the scene just when we needed them. I was 4 going on 5 in 1964 when the band played Shea Stadium in New York. Within a year or so, my older brother was playing their hits. When I turned 13, I absolutely loved the lp ‘Band on the Run’ and Paul! So imagine me at 50 and my husband a few years older getting to see a legend this close?
I was misty-eyed when he sang ‘Jet’-why this song, it was near the beginning of the concert. Sir Paul is a young 68 and his fellow guitarists are 55 and 51!

I thought they were in their 30s they were rocking so well! Hearing so many hits by both The Beatles and Wings (and solo I guess) was a dream come true.
So this concert was definitely meant for us to attend. The place was packed-thousands of people-and I look to my left in a section over, and there is my friend and maid of honor standing there! I hadn’t seen her in years, though we talked on the phone a few months ago. And she isn’t a computer person, so she didn’t know we were going to the concert. During a break in the second encore (when Sir Paul signed a lady’s back as she was a breast cancer survivor and you know his first wife Linda wasn’t) we went over to see my friend Linda. She was so surprised! We took this photo before we went to see her as I was afraid I’d miss a chance to talk with her.

The couple next to her had left, so we stood next to her for the remainder of the show and she got a few hugs and we got to see the big screen we couldn’t see where we were sitting. I took some videos and spliced them together and will burn a copy for Linda and share here too.
The most exciting part of the concert-the piro-techs for the song ‘Live and Let Die’. If you know the song, there is a very loud part-fire shot out of the front of the stage in about 4 cyclinders! It was awesome! You could feel the heat from our seats! And the fire came out twice.
He did lots of tributes-to his first wife Linda, John Lennon and George Harrison-he played a ukelele for George-Something in the Way She Moves.
The concert lasted almost 3 hours! No intermisson! Over 25 songs and two encores!!! I thank Sir Paul for waving the Pennsylvania flag, but not for people handing out brochures about how badly chickens are treated before the show-ugh.
We had to wait a bit to get out of the parking lot, but when we did, we saw a white stretch limo-wonder who was in it?

We were a bit ‘behind’ the scenes, but I’d rather be 75 feet away to grab a photo like this then way in the back of the place where they had to look at the big screen. We couldn’t see the big screen where we were, just a few smaller ones, but who wanted to look at them anyway?
Bri found this video that showed our section of the audience. We are marked with an orange arrow (we are both in black t-shirts) and my friend was behind the guy in the blue shirt a little over on the right. Cool!

The other night Brian was listening to CDs. That always helps to lighten his mood and he acts like his old self as he is relaxing and not worrying about anything. 9 out of 10 times he’ll put on some ‘Wings’ for me which he did that night. I then remembered that Sir Paul will be in Philly sometime in the future. I went online and it’s the 14th of this month. I asked if we could go and Brian said ‘YES’! Woo hoo! The good tickets are all gone, and we really couldn’t afford them anyway. The ones I got are extreme stage right, but not really high up. And if there are big screens, that will be neat too. And who is to say we won’t take a little walk to see him closer? I was just at the venue with my friend to see James Taylor and Carole King. The worse part will be the parking, but there is no Phillies game that night, so it should be better than the last time I was there.
Brian’s gone to most concerts over the years to see performers I like. The last time he went to one he really ‘got into’ was Hall & Oates in the early 80s (I love H&O too). I’m going to bring my camera in my purse again.
Talk about crossing something off your bucket list. Can’t wait! I had a hard time getting to sleep last night.
PS-My older brother Dave is a huge Beatles fan and has the same bass Paul is holding above.

Memoirs of a great evening with two legends, originally uploaded by DianthusMoon.

A collage of the memorabilia I saved from the Troubadour concert I went to a few weeks ago with my friend Lorin. The program, the ticket and the excellent review from the Philly Inquirer.
Having a rough week here. Brian is over at his dad’s spending the night. I had to get mad at him to make him see that an 87 yr old who just got out of the hospital needs someone there the first night (after 5 days). Bri’s dad was ‘diagnosed’ with Crohn’s Disease, yet given no special diet to follow. He is weak on his feet and could hardly get up the stairs. What’s going to happen tomorrow night and the next night? This may be a wake up call for both of them.
Here’s Sean and his Pop-pop last July…

I’m also depressed as the procedure I had seems not to have worked. They say after 3 months you should know and although I seemed to have skipped a month, I am almost like I was three months ago. I had the worst headache most of the day to go along with it. Bummer. I’m taking it one month at a time now.

My video from the concert.

The stage during intermission, originally uploaded by DianthusMoon.

My first time at the Wachovia Center. I use to see most of the concerts I went to at the Spectrum or the Mann Music Center. This was sold out and they have another concert here again on the 22nd of June. 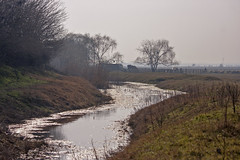