Not only are these gorgeous yellow Swallowtails fluttering here and there, Brian and I were doing some much needed yard work over the weekend. 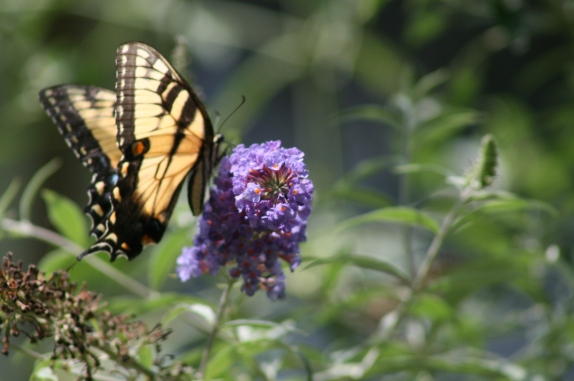 Saturday we were pulling weeds out of flowerbeds and Brian did the sidewalk. I thought it would be wise to get the weedwacker out on Sunday, so I fished around the shed and found it plus the extension cord. I started and Brian finished, though he ran out of cord. Big improvement!

It was one of the most pleasant days we had in a long time. I even got the iPad to work sitting outside so I watched an episode of  Web Therapy with Lisa Kudrow (remember Friends’ Phoebe?) She is really good with her prim and proper voice, but ‘her web practice’  looks like she has ulterior motive like maybe fooling around with her web patients!

With the events of Friday-the shootings in Aurora, CO…we’ve been walking around here with a sick feeling in our stomachs. An artist connection on Face Book said an old friend of hers lost her granddaughter Veronica, age 6. This is a nightmare. The public shouldn’t get their hands on assault weapons capable of firing round after round of bullets. Wasn’t it enough last year in Arizona to start regulating weapons like this? Sean was at a midnight screening of  Batman in Delaware, but who is to say why couldn’t that have happened in any theater?