Back on July 20th we were looking for a day trip to go on and I saw that Elk Creek State Park had a lot of water around it and was less than 40 miles away. We had never been there before and only knew the lay-out from the internet. There is the Turkey Point lighthouse ‘almost’ on a cliff near the Chesapeake River.

So let me tell you, I was dang lucky to hike almost a mile to this point! It was about 91 and rather humid. There were some steep parts, but what made it harder for me was tripping on a rock and almost falling on my face! That messed me up the rest of the way. We had asked people at the beginning of the trail how hard it was and they said it wasn’t too bad. I’m the only one who had water with me. To make a long story short, it took us almost 3 hours! We stopped a number of times. We checked out a secluded beach and looked for a geocache.

This was inside a log. The pen was sticking out near the top of it!

The lighthouse was a ‘virtual’ cache. The three of us went up the spiral staircase, but only Sean went up the ladder to the top!

Lots of pretty sights and wildlife along the way. 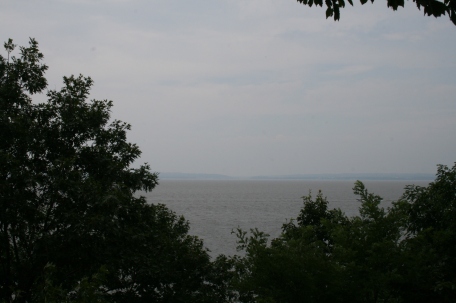 One of our first views of the Chesapeake 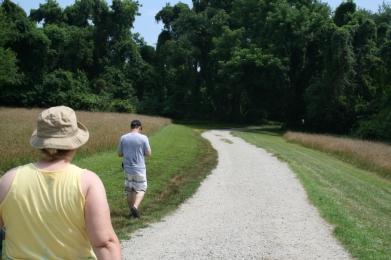 A flat part of the trail, but in the sun! It was downhill and rocky after this and then I tripped. 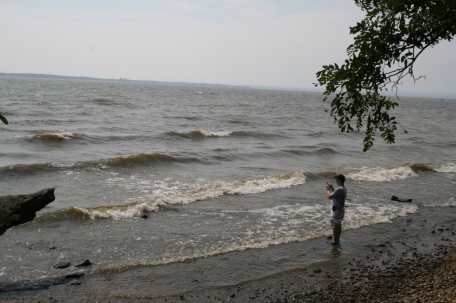 We still plugged along. Had to have the Vera Bradley purse in ‘the jungle’. By this time the guys were very perspired….with no water. The ‘gift shop’ at the light house was closed too.

Finally!  Look how hot Sean is!

The Zebra Swallowtail were everywhere! I liked them so much, I ordered what they love for our yard from Burpee- a couple of Paw paw trees!

When we went back, it was really hard on my back. I felt weak down my legs besides being very warm and half sick. We had to stop many times. I am very bummed I am this way as I like adventures like these!

You can’t see all the Zebra Swallowtails in this meadow!

We were lucky not to really get any bugs bites or have ticks on us. We used Off! and Tea tree oil before our hike. I started to cry when I saw the car. I doubt our son will go on hikes like this with me anymore. We were on a local trail where I hide a geocache, but it was flat. I walked almost  a mile on that one.

We then drove down a ways to the beach area. It was around 5 and we were getting hungry Sean got his feet wet. Lots of people were enjoying the area. I don’t know how they can swim in brown water.

A little bit down the road, I got another virtual cache of a historic marker near a church 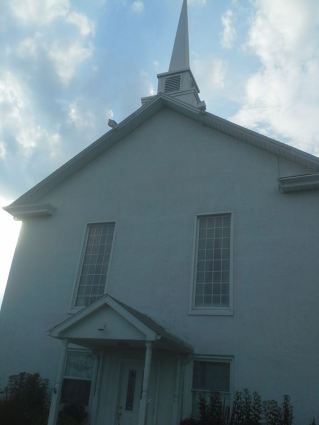 We stopped at a nice Pizza Hut in Elkton and then found one more geocache-so cute, but it came off the hanger and the cache owner was a bit peeved.

The log was a tube drilled into the squirrel! The mosquitoes were attacking us in this little wooded area more than in the big state park!

So we had an interesting day. I was much better after I ate too. We have air conditioning and I am too use to going inside when I get too warm from gardening or walking. I’d love to come back in cooler weather to see the leaves changing.