Every year we take a drive to the part of Lancaster County that is closest to us, right off of Rt. 1. This year we decided to stop for a geocache first and went up and down some rural roads to end up at a very small cemetery.  It was actually across the road from houses similar to ours, so I guess many moons ago, it was way out in the country and provided a permanent resting spot for the local farmers and their families. Well at least a few of them. There were a few interesting ‘plots’ that had chain around them and metal tassels like you’d see holding fancy curtains back. I didn’t venture around much as the grass was thigh high and I already had one bad tick bite this year (just had a Lyme test today too). So I looked for about 5 minutes or so and couldn’t see anything. The cache owner and her mom have a few caches in these parts, but neither take care of them anymore. I even brought a new container and log as I saw where they needed replacing. I think the original is gone now.

So we were a little perplexed about what Street Road to go on and we turned way to soon! There is one before the reservoir and one after it! We’ve been here at least 3-4 times now, think we’d remember by now. Of course it turned out to be a blustery, cool day…again. And it didn’t take me long to go through the four different greenhouses and fill up a wagon and then some. 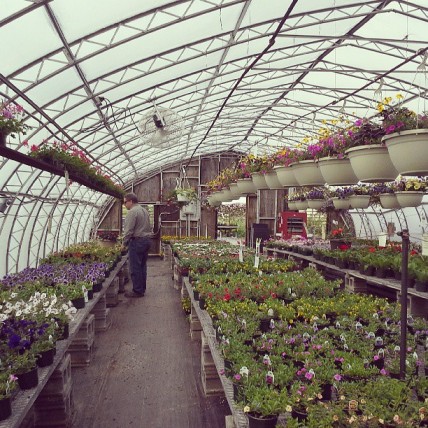 I will have to take photos of the different kinds of petunias I got from almost black, to yellow with a black edge, to the peachy yellow, the chartreuse with pink and pale lavender. All the plants came in last night as we had cool temps. Not tonight though. I gave them a drink and they are safe under the big evergreen out front.

This is the scene after we left with a skinny purse:

They have quite a long drive! They even had a tour bus come up with a group of older ladies. The owner said she’s only seen that one other time.

So we were trying to decide what to do. We always tend to get out after 2 pm and it was 4:30. We stopped at a local church to look for another geocache and came up dry. Wind blown, but dry.

We went down more back roads to one that was suppose to be a quick grab. We had to go in woods, no luck except for a tick crawling up the driver’s seat.

We decided to go to a little town where Brian use to work from and eat in a family restaurant. I can’t believe club sandwiches cost almost $9 each! Wow!

We stopped at a park on the way home and could not locate yet another cache. I was getting bummed! Today I emailed a husband and wife cacher as they found it the same day! They said it was in a grate in the middle of a parking lot hanging off a fishing line! What? I happen to see the grate, peeked in and didn’t see anything. They said you almost had to kneel down to see it. More seasoned cachers know about this stuff. We almost have 300, but haven’t seen a grate one before. We’ve seen one hanging off a wall with fishing line though, but people helped us find it.

To get one blasted cache, we stopped at a Wallie World on the way home. I thought for sure we’d find the lamp skirt one, but there was nothing there! We drove to another cache, didn’t want to go in a wooded area and then I saw where the Wallie World guy had another one. Went back there and I finally found one! One out of six is terrible.

Waiting on some blood work I had done today to check my Vitamin D level and my parathryoids.