What I really love about the iPad more than the games, are the info apps with articles from topics of your choosing. The app ‘Zite’ is one I enjoy reading. I have the ‘Film and TV’ section and there were candid photos of old time Hollywood celebrities and their directors. I guess before I was even 10, I thought the movies showed us how people really lived, like in ‘There’s No Business Like Show Business’-singing and dancing their way through life and everything was peachy keen in the end. And if the movie was in black and white, it had to be real, right? (Thinking home movies were mostly b&w). I mentioned There’s ‘No Business…’ as one summer way before VCRs, Blue ray and on-demand, we had to watch tv and watch the movie when it came on. That movie was shown once a day at say 1 pm for at least a week. My brother Don must have watched it almost every day. It was either too hot or rainy and I remember Ethel Merman singing her heart out.

Anyway, seeing all the old photos like this also sparked another memory for me (Here’s the site with more photos): 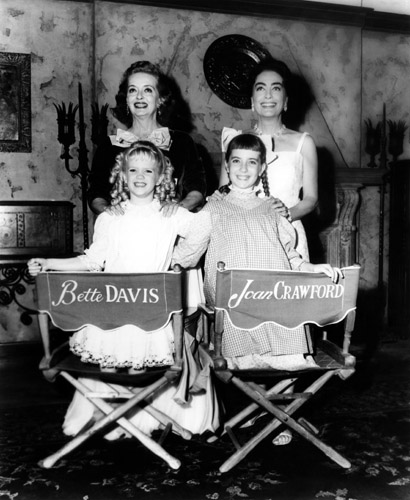 They say it’s very unusual to see Joan and Bette smiling so broadly, especially in a movie where Bette is playing a kook.

This is not our game, it may be long gone. You were to collect the stars from the different movies on the board-it was like Monopoly. I remember playing it at night down in Wildwood, NJ when my mom and grandmom went to play bingo!  My mom always enjoyed movies and celebrities, so I guess it rubbed off on us. We were probably 13 and 14 when we enjoyed this game.

It’s based on 20 movie productions. Players take turns moving around the board and have the option to buy various productions of older movies like Casablanca, High Noon, or A Streetcar Named Desire. There are title cards to represent ownership, with a list of three actors on them. If someone lands on your production they pay “studio fees”. The amount is dependant on the number of stars you’ve collected and any awards you’ve collected.

There are several ways to acquire stars. The cards are nice with b&w photos of actors such as Humphrey Bogart, Marilyn Monroe, and 58 others. Once you’ve completed the production, you are eligible to receive rewards and there are several ways to get those. There are also Production & Publicity cards much like chance and community chest in Monopoly. Bankruptcies occur if you have to pay more than you have. The short games last about an hour and there are three variations.

Regular game is two to three hours. Reviewed by Rex Reed for a finishing touch.

The above description is from Gameboardgeek.com found at the Monopoly link above.

Error: Twitter did not respond. Please wait a few minutes and refresh this page.